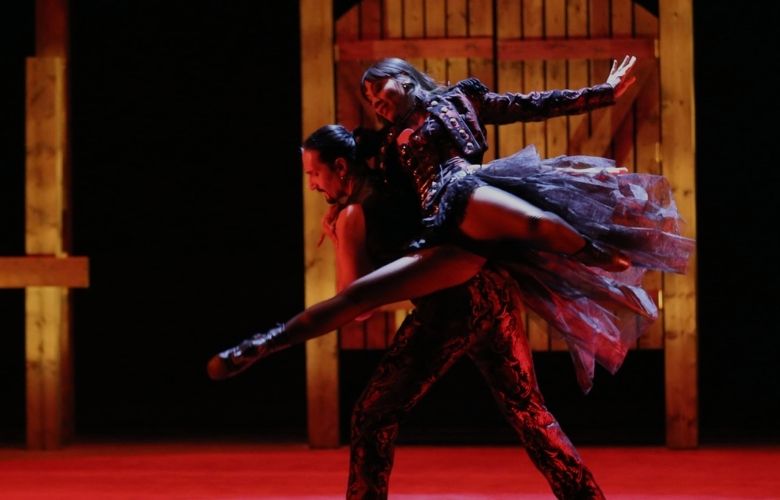 Ottavio Gesmundo is a choreographer, stunt coordinator and multifaceted performer with extensive theatre credits that include Broadway, television, cabaret and circus. Ottavio has worked with musicians including Britney Spears, has appeared on The Tonight Show with Conan O’Brien, and he is also the co-author of the award-winning travelogue and circus memoir, The Grand Gypsy.

Hello Ottavio, thanks for talking with us at TheatreArtLife! How are you doing, and how are you coping with the pandemic at the moment?

Hello, It is my pleasure to speak with you today. I’m actually doing pretty well. My wife, Naomi, and I are back home in Las Vegas and taking full advantage of this unprecedented time off to create new material and sharpen our various skills even more.  When Naomi and I first met, we were working in a musical together and singing is a skill that we both miss performing. So, we’ve been working on adding that musical component to our performances. 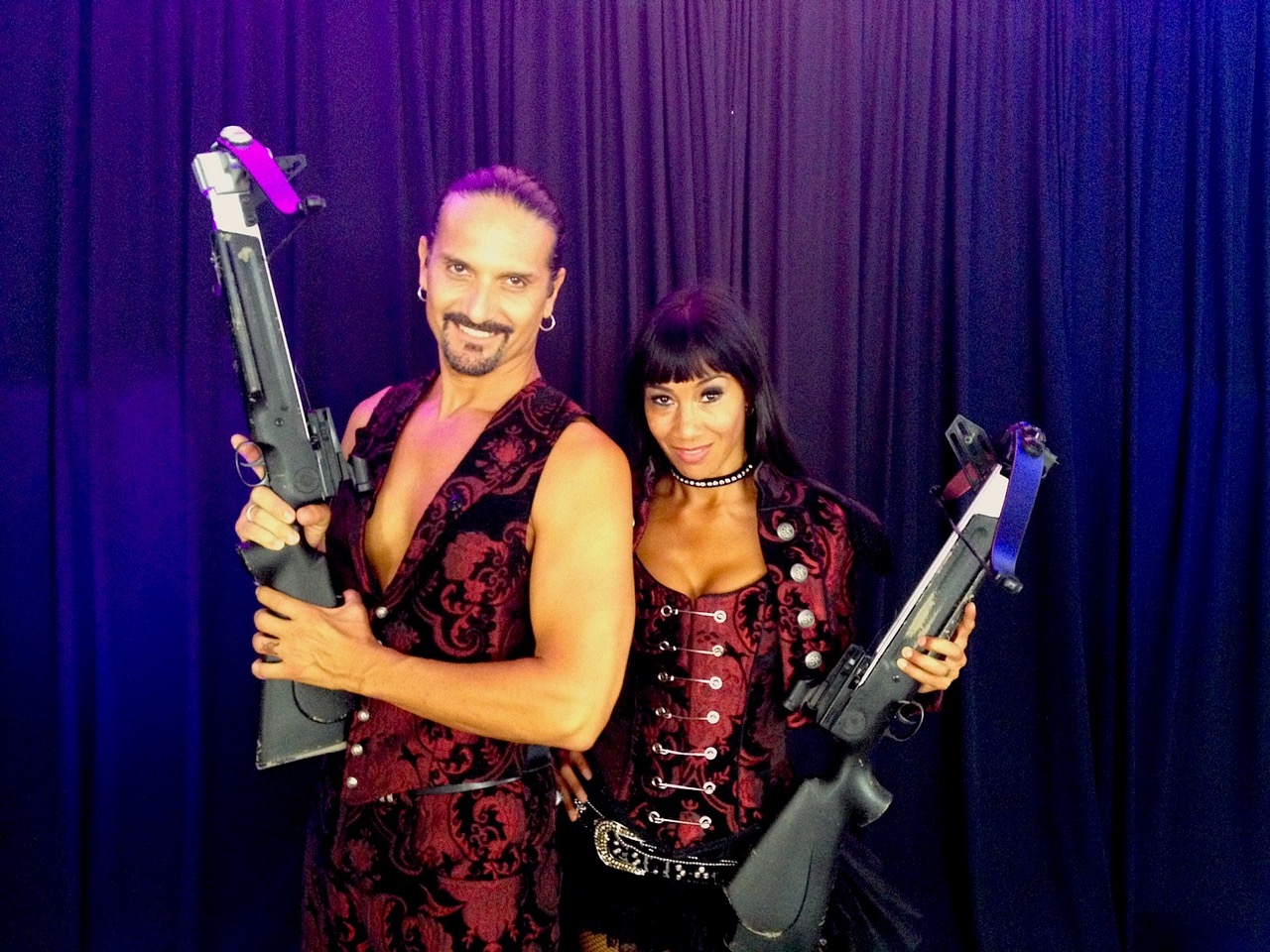 I often ask our guests how they found their passion for the Arts and how they started their careers, however you have a fascinating lineage; your grandfather Ottavio Canestrelli was a renowned circus artist, and you hail from more than six generations of Italian circus performers. I’m guessing circus has always been a part of your life since you can remember? Did you always feel drawn to continue the family tradition in one way or another?

Absolutely! When I was really young my grandfather had a very popular chimpanzee act called Mr. Coco and Company and I remember wanting to be a part of the act. I must have been about four years old, and I recall riding my Big Wheel tricycle down our Las Vegas neighboured telling all the kids to call me Coco because I thought it was cool. Plus, Ottavio was too difficult for them to pronounce!

Seeing my family perform all these prodigious achievements in acrobatics just filled me with a desire for the stage as well. But my mother didn’t want me to be a circus performer and was overly protective because my father had died in an accident in the circus when I was only one year old. Regardless, I found my way into the ring and my first job was in the circus when I was 8 years old. I worked as a clown with my godfather at the Circus Hall of Fame in Sarasota, Florida; with my mother’s permission of course.

Then as a teenager, I began assisting my great uncle (my grandfather’s brother) with his acts of chimpanzees, camels, and horses in my aunt and uncle’s circus in Mexico City at the Astros winter quarters for Circo Atayde Hermanos.

However, I found my calling in the theatre at the age of nineteen when I discovered I had a natural ability for dance. Two years later I was performing on the Las Vegas Strip.

And returning to your grandfather, Ottavio Canestrelli, I have to ask about The Grand Gypsy that you created and co-wrote together, which is a biography of your grandfather’s incredible life. What was that experience like creating the book, and can you tell us about your relationship and how he influenced you? 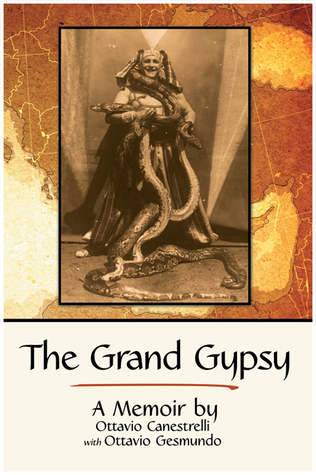 My grandfather began writing his memoir in 1970 and continued to work on it, off and on, until his death in 1977. The manuscript was a large leather bound book that consisted of single typed pages with an enormous amount of photos and newspaper clippings glued throughout. It documents his remarkable journey around the world, plus, our family history and genealogy.

I didn’t start work on the project until 1999, twenty-two years after my grandfather had passed. At first, I just transferred his written text into a word document and then scanned in all the photos and newspaper clippings. It took me several more years to edit his text, place it in a chronological order, and find the right approach to present his story while keeping true to his voice.

As I researched to verify information, names, and dates, I discovered there was more fascinating and pertinent information that needed to be told so I periodically contributed additional paragraphs in between his text, as well as an introduction and epilogue.

My grandfather has been a huge inspiration. He had a very strong work ethic and documented everything with photographs, which I also try to do. His extensive travels during a time when it wasn’t easy to do has also put things into perspective for me, especially when we face a long journey to perform in places like Dubai, Macau, or Indonesia. He also infused theatrical elements such as dancing and singing into his circus productions, which I also integrate into our performances.

Your performance work has been incredibly varied as you’ve worked across theatre as a triple threat, have a broad collection of TV credits, and have performed with the world’s biggest music artists, not to mention all of your circus and stunt work! With such a wealth of experience, what have been some of your favourite moments or highlights?

I am extremely grateful for many opportunities that enabled me to grow as a performer and I have been very fortunate. I will try to condense a few of my favourites but just in Las Vegas alone, I performed in over twenty-five productions! The first being the musical A Chorus Line at the Sahara Hotel.

Some of my favourite Vegas show moments were to portray both principal roles of The King of Thieves and The Pharaoh while racing a chariot behind a team of horses and battling with whips in an Egyptian themed show at the Luxor Hotel, perform as a dancer with the Spice Girls & Aerosmith on the Billboard Music Awards, and work with Michael Crawford, David Cassidy, and Tommy Tune in the principal role of The Master of Time in EFX at the MGM Grand; for which I was also a dancer and stuntman.

My most cherished moments as a theatre performer are being an original cast member and fight captain for the musical Saturday Night Fever on Broadway, fight captain and ensemble member for the first international company of Elton John & Tim Rice’s Aida musical in the Netherlands, which is where I met Naomi, and performing the role of the flying Green Goblin in the Equity National tour of Spider-Man Live! A Stunt Spectacular that sold out Radio City Music Hall. Incidentally, I was also stunt director & choreographer for the Spider-Man Live! show.

And with such multi-disciplined work, do you feel like there’s any one area that you feel drawn to the most, or where you feel most ‘at home’?

My life and career really have been a cross section of circus, theatre, and stunts and I feel equally at home in each genre. I love performing but I also have a passion for being creative, which goes beyond just creating material for ourselves. Naomi and I both really enjoy helping directors and producers build their vision for a show. Whether it’s providing dance choreography for a circus, or choreographing dance and circus elements/stunt coordination for theatre shows, we really enjoy it all but the approach is different for each. It really depends on the proficiency of skills that each cast member possesses. 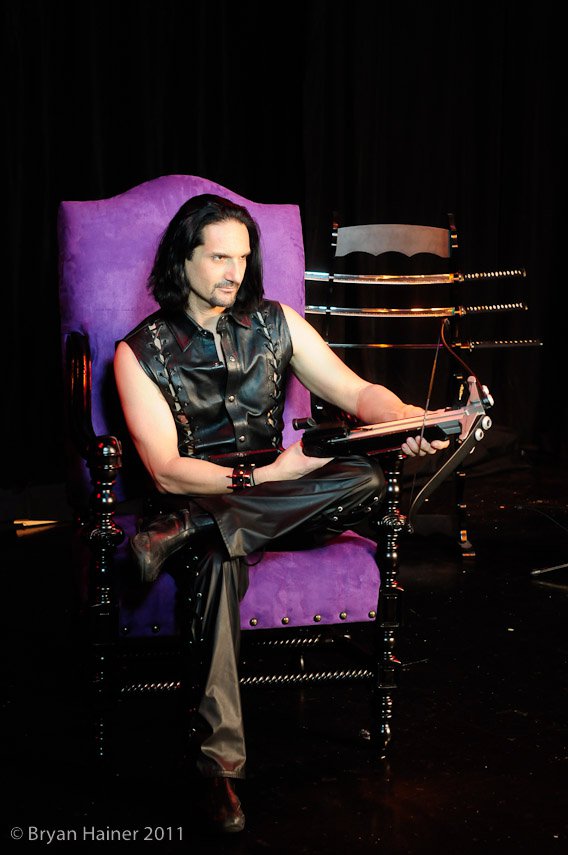 For example, in 2006, I was hired as fight director but also to infuse circus elements for the first time into the musical Pippin by the Goodspeed Opera House, which subsequently became an Equity National tour. The cast for this production were predominantly musical theatre performers with a few possessing additional circus skills.

I choreographed aerial moments in the show with one girl performing on a lyra in the opening number. I also created an aerial silk routine that two of the ladies performed on either side of an aerial hammock routine that the characters Pippin and Catherine performed centre stage while they sang. The challenge here was to make sure all the actors were trained well enough to execute the routine safely while providing a beautiful aesthetic. I made sure the routines were not beyond their grasp, literally, but were not rudimentary either. Thankfully, we had several weeks of rehearsal and the cast worked hard and were talented, so it all panned out.

In contrast, Naomi and I choreographed a show for Krystallpalast Variety Theater in Germany last year. The cast were mostly circus performers so the challenge was to provide fun accessible dance choreography at various moments throughout the show. We only had two weeks scheduled for rehearsal but because we were well prepared, we taught all the choreography within four days. We made the process fun and in doing so made it easier to refine the movement as we reviewed each day until opening. The show ended up being a hit and because our run was cut short due to the pandemic, we are contracted to return to mount and perform the show again in the spring of 2022.

But I do have to say, the theatre does hold a special place in my heart.

Some people might know you best from the marvellous Crossbow Stunts that you and your wife Naomi perform as MR. & MRS. G. How did you come up with the idea to start working together in this way?

My sister had a crossbow act for many years and she was retiring from performing and asked if we would be interested to take it over. We thought “that sounds like fun”, but we wanted to put our own spin on the performance and integrate our various other skills to create an entirely new way to present this type of act.

Because we are dancers and martial artists, movement is a big part of our performance. We integrate dance in between our shots. We also do everything tied to the music; cocking the crossbow, loading the bolt (arrow) and even shooting and hitting the target is all timed to the beat. We also have many different versions and themes we have performed over the years from adult cabaret & burlesque to family friendly.

While I know things are far from back to normal, are you working on anything at the moment, and what can we look forward to from you next?

During our downtime, we’ve created an entirely new act that integrates whip cracking and targeting with dance. Similarly, like our crossbow act, everything is timed to the music. Cracks, targets, and all. There is an online show coming up called HEADLINERS that will feature our new whip performance. It will air on January 21.

We also created a music video where we sing, dance and perform crossbow stunts called Pull My Trigger and we hope to announce its premiere in an online show soon. I will post updates about that on our Facebook & Instagram accounts. We will return to Leipzig, Germany to perform once again at Krystallpalast Variety for the spring & summer of 2022. In the meantime, we continue to train and await the next opportunity. 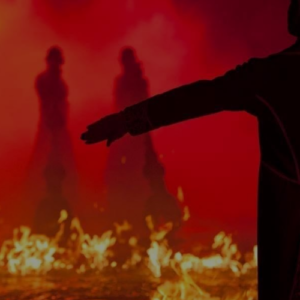 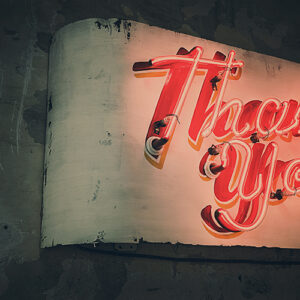 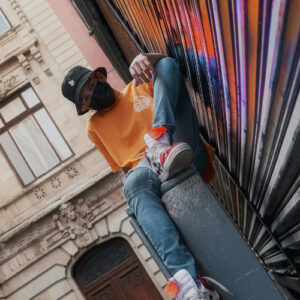 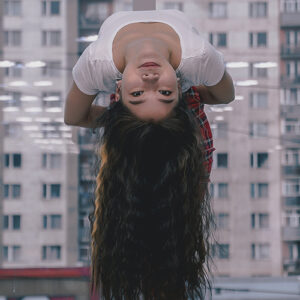 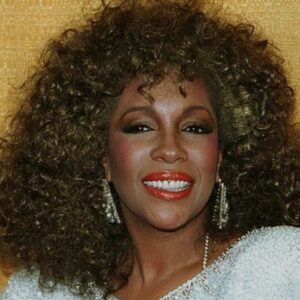 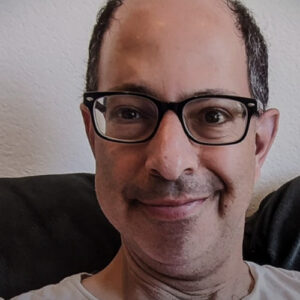 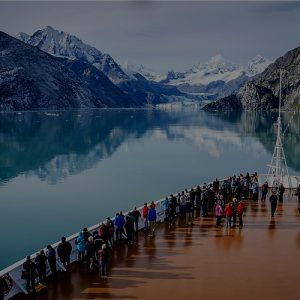 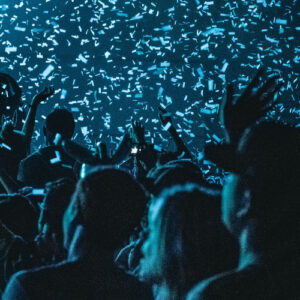